Breaking the Rules at A Magical Bookstore

Before I launched into Nicé I thought there were a few other highlights from my first six days in Paris that warranted sharing. First up is my visit to Shakespeare and Co., a famous English book store right along the Seine in the Latin Quarter. I'm not sure if it was fatigue or what, but initially I had a hard time finding this place. It wasn't until I was sitting in line beside a young Japanese traveler whilst waiting to climb Notre Dame that I got accurate directions. As I looked down I noticed he was reading an old copy of Peter Pan and figured he had to just been there. Sure enough, I was right. The young man spoke excellent English and after climbing the 400 or so steps of Notre Dame, he sent me on my way in the right direction.
Shakespeare and Co. has quite a history. Opened by George Whitman in 1951 as an English bookstore and library, it soon become a haven for American writers staying in Paris, and to this day has sleeping facilities with 13 beds. It's claimed that over 40,000 people have stayed here. 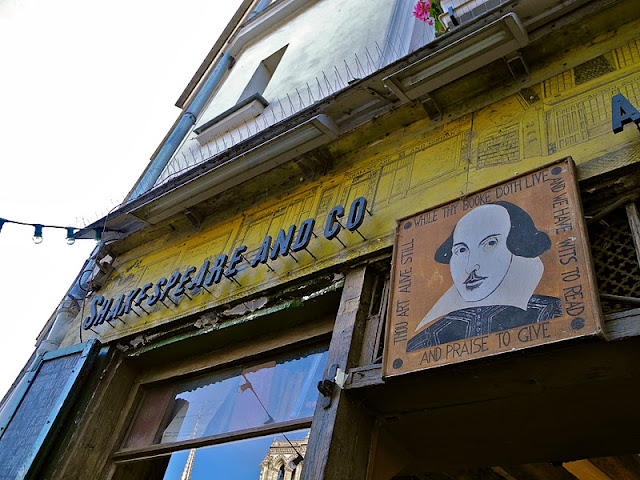 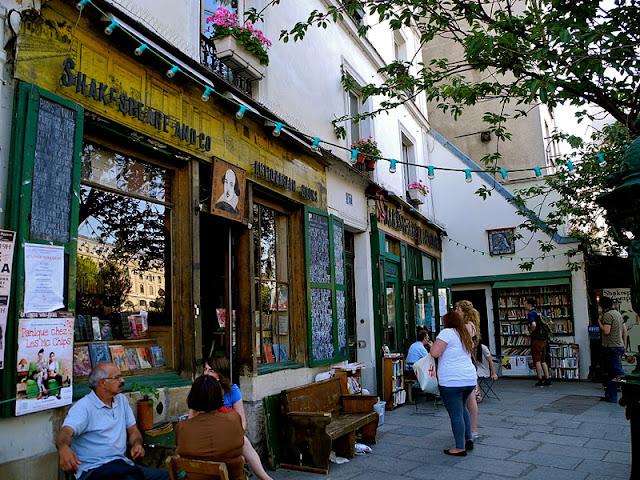 The first entrance brings you into a very small shop, filled with extremely rare copies of famous books. This would have been an incredible souvenir, but alas, they were all quite out of my budget. Next time perhaps. 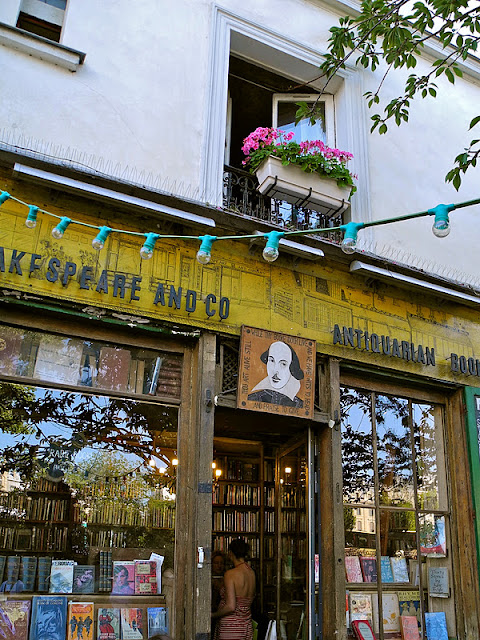 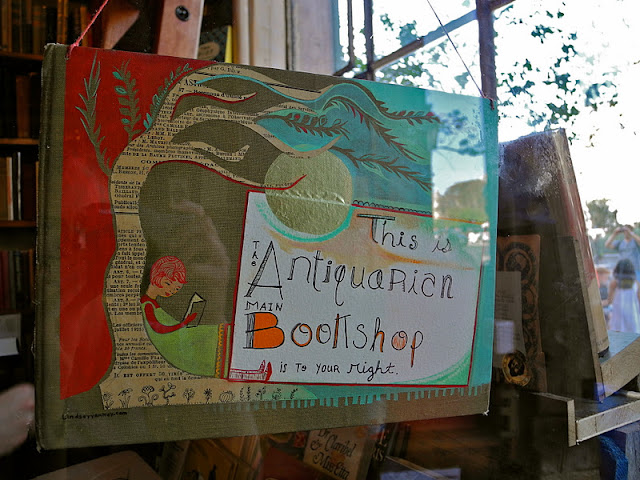 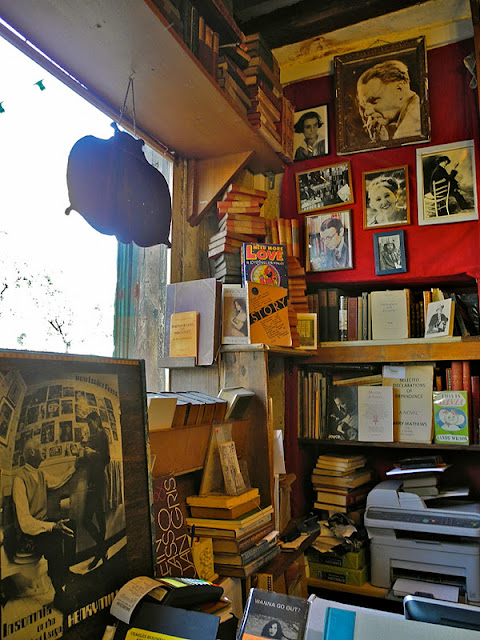 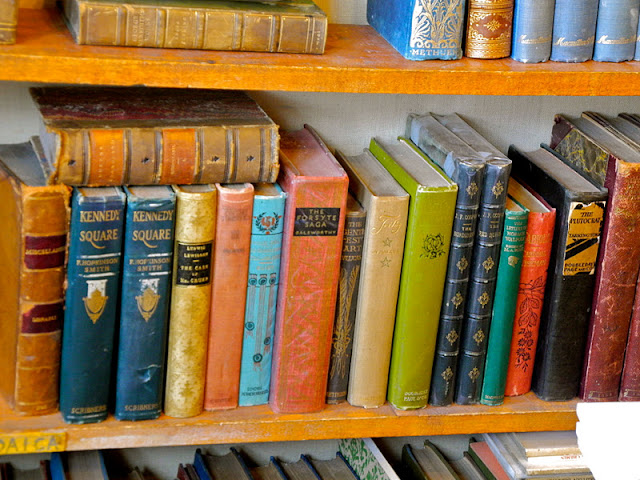 As you exit the used and rare book shop you pass this 'newspaper' on a giant chalkboard. Pretty amazing. 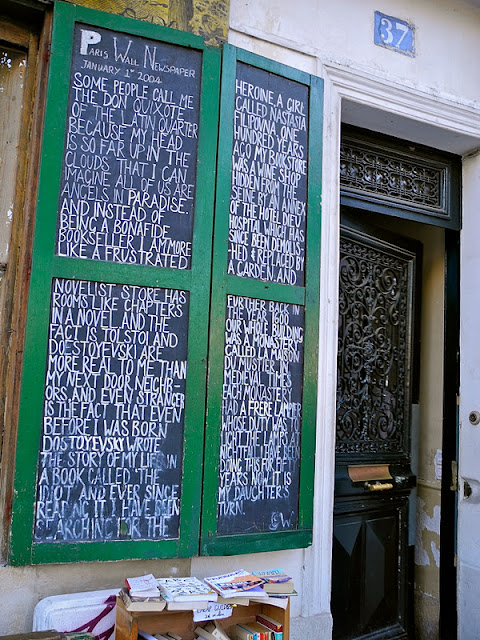 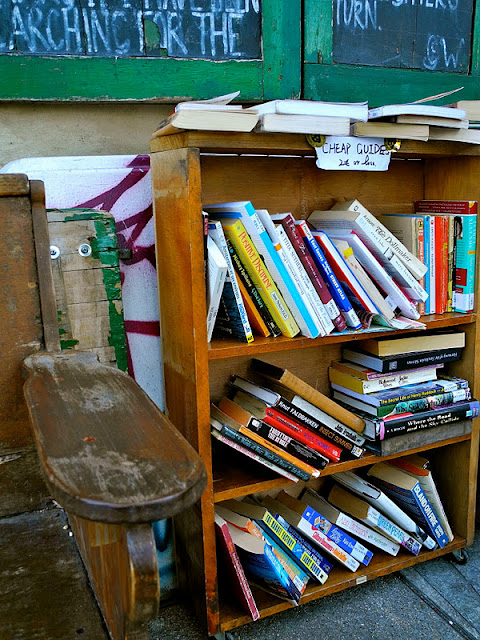 The second entry way leads to the actual bookstore, filled with modern day printings of English books. Again, the character of the place was just overwhelming, with something exciting tucked into every corner, as well as being filled to the brim with people. 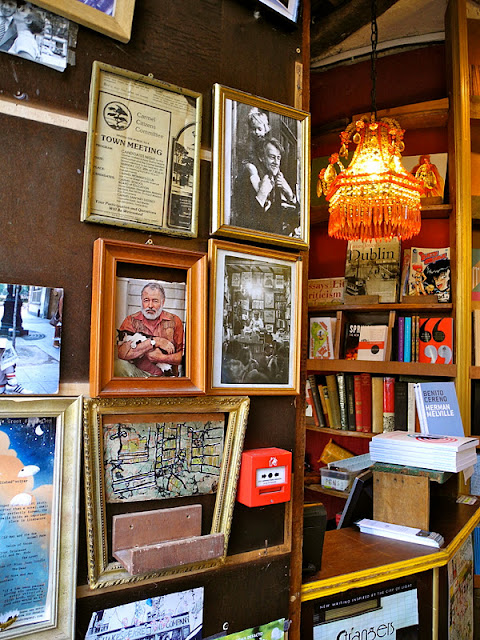 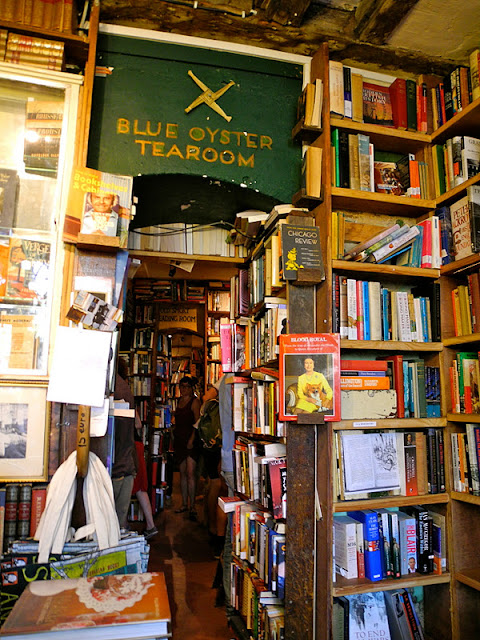 I would later learn, that technically I was not supposed to be photographing the upstairs, but in my defense it was a simple case of a language/culture barrier. (although, let's be honest, I would have probably broken the no photographing rule even if I had truly understood it.) You see, everywhere on the stairs there were signs that read 'No Photographs of The First Floor'. This struck me as odd because the stairs were at the very back of the store. I had been happily snapping away all through out the store, and thought to myself, 'well that was silly you Shakespeareans, if you didn't want me taking pictures of the first floor, you should have notified me a whole lot sooner!' 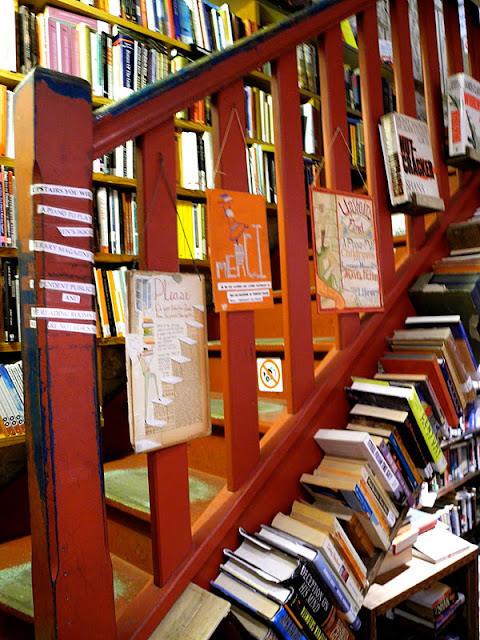 But I still just got the feeling I was missing something. As I walked up the stairs, I felt like I was entering a magical land, a place that I would have dreamed about as a kid, full of old things, rare books, people reading in corners, drawings on the walls and little knick-knacks everywhere. I thought this must be what they want to keep a secret, but it says first floor. Stumped, I found a French couple who spoke a bit of English who were snapping away with their camera. I motioned to my camera and said 'okay?' as a question. They nodded and said 'yes'. That was all I needed to start snapping. Within a few minutes another French man looked at me with disdain and gave me a 'tsk-tsk'. Honestly frustrated, I looked at him and said 'What? I don't understand! Am I not allowed? It says FIRST FLOOR!' Whether it was my idiocy or the actual look of honest confused frustration on my face, his face softened, and in broken English he proceeded to explain that in France, the first story of a building is called the 'ground floor' and the second story is the first floor. Of course it is. 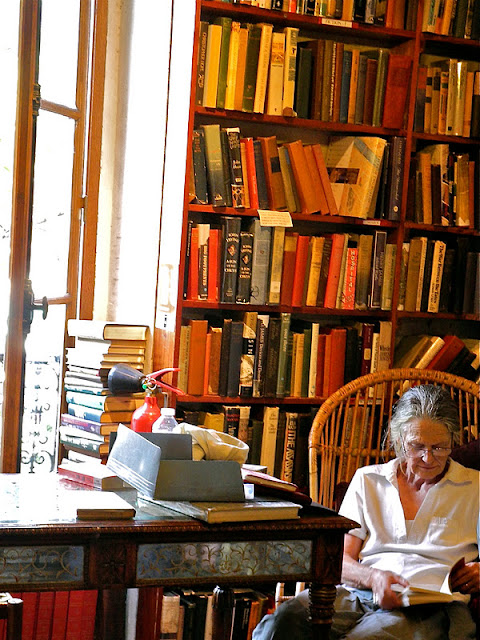 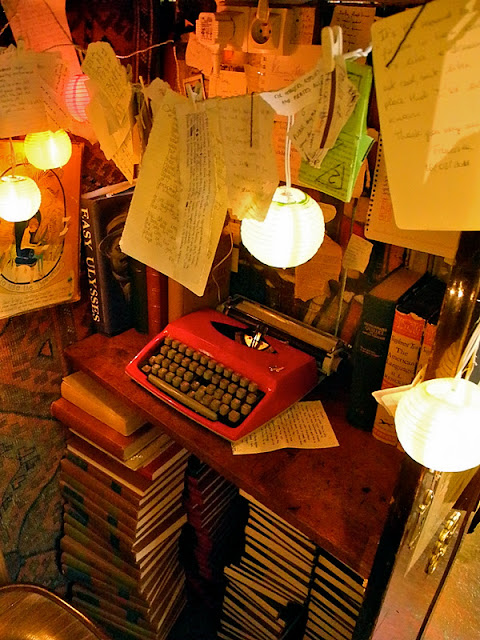 As you walked upstairs, you were greeted by the daintiest song being played on a piano. I turned the corner to find this young woman, a fellow traveler, playing us all a tune, just for the enjoyment of sharing I suppose. The music only made this place feel that much more magical. 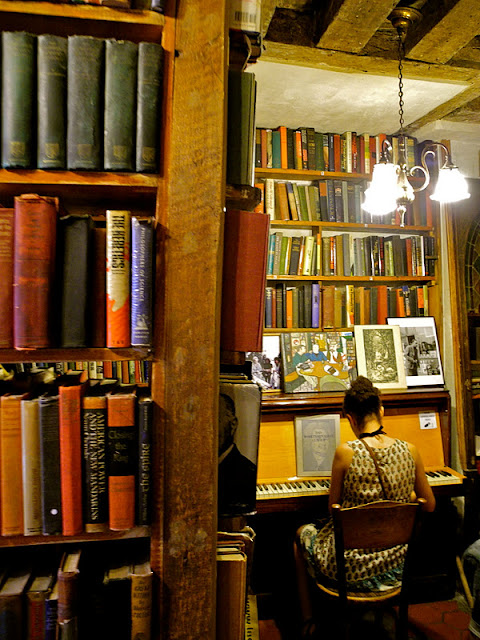 Excellent advice, especially when traveling... I want to do a post about the kindness of strangers. It seemed on more than one occasion my butt was saved by encountering just the right person at just the right time. The universe, and it's many 'strangers', is very kind indeed. 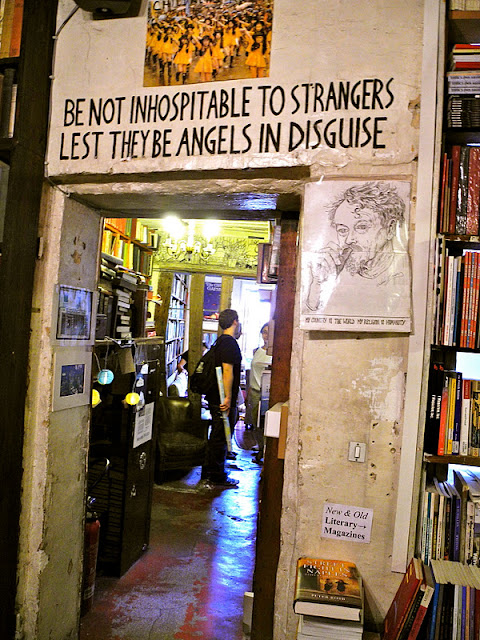 I do believe this was the most magical part. In the children's section, a reading nook was created with a bench seat partially enclosed by heavy velvet curtains. The perfect secret spot to hide away and devour a story and also a place for hundreds of previous visitors to leave little notes, pictures, and other pieces of themselves. I grappled for a good fifteen minutes as to whether or not I should shoot this, feeling that maybe it was just to personal. But ultimately the blogger/photographer part of my brain won and all my moral fiber went out the window. It was just too lovely not to share. 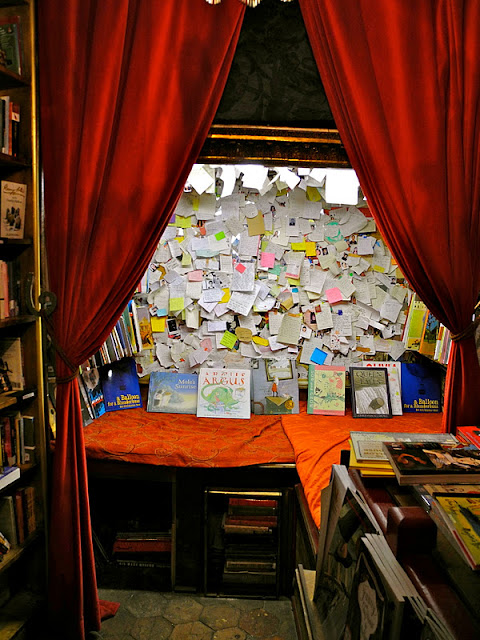 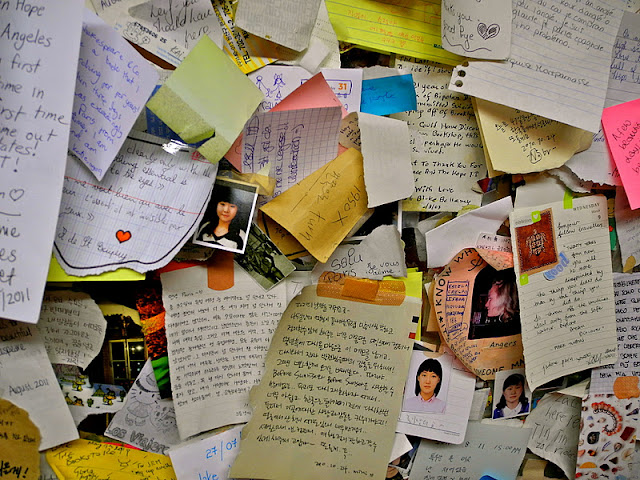 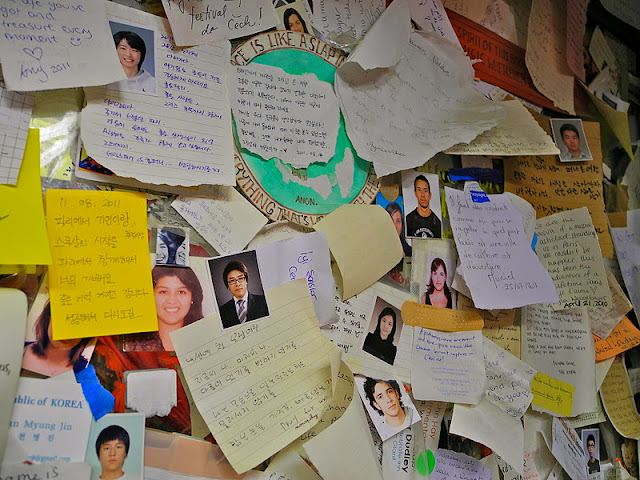 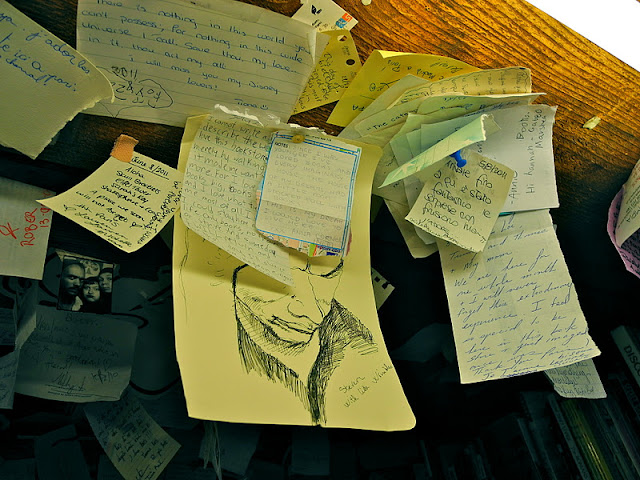 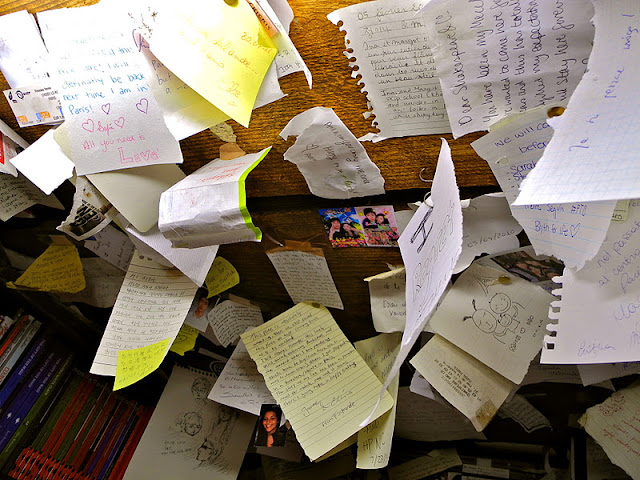 Visiting this iconic bookstore was definitely a highlight of my trip, and in hindsight I wish I would have brought back something from this place. But I suppose I have my slightly illegal photographs and memories stored away in my mind. That will have to do for now.